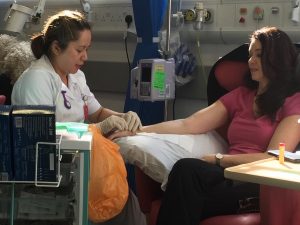 I thought I had it handled: the meds, the new schedule of hospital appointments, new food regime, my admin. I’d written everything down: what to take, when; how to take it (with or without food, with or without gloves, morning, midday, night, once, twice or more times a day), listed things to get done, was recording my temperature twice daily and all experienced symptoms. I thought I was keeping on top of it all. I was feeling clever and calm. I was. Then I wasn’t. I felt angry and then a little stupid. I had missed a key drug.

It was Tuesday morning, I was waiting for my cannula to be inserted. A light bulb moment and then a wee bit of panic; I realised I had not taken cyclophosphamide yesterday. Why didn’t the nurse tell me to take it? Was I meant to take it as soon as my consultant gave the go ahead for Chemo? Yes I think I was, yet the instructions were to bring the drug up to hospital so I had expected the clinical team or nurse to tell me when to take it. Oh what a f**k up. I explained what had happened to the Nurse and she said there is no mention of Cyclophosphamide on her medication chart. Later she mentions there is usually a check box for that kind of thing. How much of a calamity was this? It’s a strict clinical trial protocol isn’t it? What happens If I don’t take the right med on the right day?

Nurse M had given me a table chart mapping out which med needed to be taken each day though it doesn’t account for daily frequency nor all of the supplements I’m having to take as well so I had written out a Janine version. Ha! Obviously I’m not quite as on top of everything after all. I spent the end of Chemo day 4 waiting for my consultant to advise the nurses what happens to me now and if and when I should take Cyclo. Dr L comes by about 4pm: “don’t panic, it’s fine, of all the meds to miss, this one was probably best”. He is such a sweetie and seems to say all the right things.

My heart rate (up to 90 bpm) began to return to normal. Dr L suggested I don’t take Cyclo straight away: “it’ll keep you up all night, take it in the morning if you don’t have an infection, fever or high temperature”. Phew. Not a complete disaster then. We talked about the email he’ll send, about it being ok for me to travel (hmmm, hoped he still trusted me to take the meds on time while I’m away) and he checks again that I WILL be back for the start of cycle two. I reassured him I would be.

I felt awesome on Wednesday; the sun was out drenching the garden, I felt pain free and full of energy. I thought; “This is good! I even feel a bit high”. I wondered what was causing the euphoria. Drugs, no doubt. Relief, probably.

A superb short piece of consulting work through a team I wanted to work with had been offered but the start date was yet to be confirmed. Wednesday ended up being a bonus day as I had thought I would be working. It was a cracker of a day. I sat in the garden with S, ate well, relaxed and revelled in not having to race off to a hospital appointment or have saline, glucose and meds shoved into my arm. However, the next door neighbour’s kitten, T, was driving me bonkers.

I’m chilled out in the sun then out of the corner of my eye, on the garden wall, a flash of white and then another and then a flash of black and white; two paws and a head. A Kilroy moment. Here comes T. He must be dangling down on the other side of the wall, its so cute and funny. I sigh and laugh simultaneously knowing what is coming. I am trying to complete behavioural training with T as he and our cat, Mason, get on well and race around each others’ gardens but T is like a V8 4WD diesel vehicle (a right guzzler); he’s all paws and stomach, bounding around and eating everything in sight.

We like to leave our back door open when we are around. I was trying to enjoy the sun yet train T to stay in the garden and not go into the house (with our neighbour’s permission). The key to any behavioural training is consistency so I told myself I won’t have to do this forever and he’ll get it eventually. I took a deep breath and for the next two hours felt like a yoyo or space ball; up down, up down, up, in out, in out, chase, hiss, “back away from the cat food T”…eventually, though mostly when I WAS looking, he lay down outside, a foot from the door, making a pathetic though cute meowing sound. It could have been a request for Mase to go out to play though frankly, I suspect it was a master manipulator tugging heart strings saying “come on, you love me really, you don’t really mind if I eat you out of house and home”. 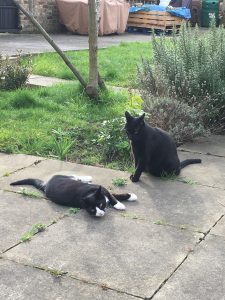 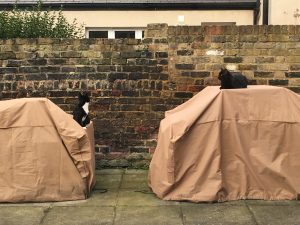 The up and down with T seemed to be the metaphor for my rollercoaster week. Next thing I know its 3am, I’m awake with an awful thought. It’s always been in my head that we are flying back on the 2nd but I had better check. Sh*t, sh*t and triple sh*t. Yes we fly on the 2nd but we don’t get back in to London until the midday on the 3rd. This can not be happening. The 3rd is a Chemo day and midday does not allow enough time to get blood tests done, consultant review, pharmacy to make up the drug and to get the chemo done. Now what? I scramble around trying to see if the flight can be changed and sure enough it can – if you have a cool £6000. No I don’t think so. I check the site again; hold on, they are still showing as having economy flights back from Calgary as available, albeit for the full price around £900-1000 (a whole flight price again on top of what we have already paid). While not pleasant, it was an option. Si woke and asked me what was going on. I told him and he said “leave it to me”.

Si rang me later saying they can get us back on the 31st for a change fee. I said I can stomach losing one day of our holiday but two is too much; there must be another way and why can’t we get the flight that is showing on the website. Eventually Si gets it sorted and we fly back a day earlier, arriving in time for Chemo the next day. We pay an extra £300 plus for the change instead of £1000 thank goodness though it is for the privilege of flying back economy instead of the premier economy seats we had pre-paid for. I have my first “this is unfair” melt down. Though with the crisis averted I start feeling normal again. I had not been looking forward to saying to Dr L that I’d stuffed up again.

I’d been chatting away to Dr L by email in the evenings and early hours about various little things that needed sorting (who’d of thought an NHS service would include this?) and he pointed out the importance of getting more sleep. Apparently afternoon naps have been proven to “prolong survival”. With the week’s crises thus far overcome, I finally fell into a deep sleep on the couch in front of a random programme, Forensic Detectives (which I secretly like for watching as you don’t have to concentrate; everything is repeated multiple times and it often sends me to sleep).

I wake up with my clever clear and calm possibility renewed and the thought “I have done 4/6 days of Chemo for this month already”. I also wonder if Chemo is tanning me as my bright red cheeks and chest of the morning now looks tanned. Strange, made note to self to ask Dr L about it.

In the mean time, the work start date was still to be confirmed so it looked like Thursday may be free too. Life didn’t wait just because I have cancer or because I was trying to deal with loads of new information and activities; the house insurance renewal turned up, washing still needed doing, bedsheets needed changing…No further crises thankfully.

P.s. S nicknamed my intravenous drip holder C3PO so I gave him some headwear for his trips to the loo…and it kept my scarf clean while in the loo! 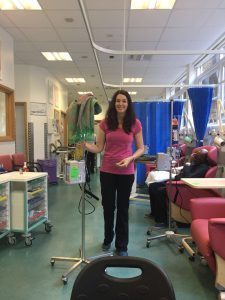 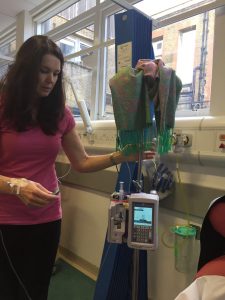 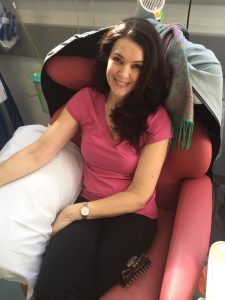